You are here: Home / Baseball / Padres And Quentin Agree to Contract Extension 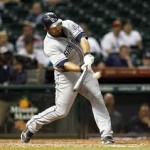 Congratulations to Carlos Quentin and the San Diego Padres on agreeing to a contract extension guaranteed through the 2015 season, with an option for 2016.

The terms of the contract are believed to be as follows:

Quentin, 29, has hit .273 (38-for-139) with eight doubles, nine home runs, 22 RBI and 20 runs scored in 40 games for the Padres this year. The two-time American League All-Star was acquired this past offseason on December 31 in a three-player trade with the Chicago White Sox.

Padres GM Josh Byrnes upon announcing the deal said, “We are very pleased to extend Carlos’ contract. He provides a real threat in the middle of our lineup and brings an intensity and edge to our club. As a San Diegan, he is very invested in the success of the Padres.”

I think Byrne’s statement sums up why this marriage has the foundation for mutual happiness over the life of the deal.  The Padres are hopeful that Quentin will continue to provide what they have sorely lacked since the opening of PETCO Park – a legitimate right handed power threat in the middle of the lineup.  Quentin gets to play in his home town, with the league’s best weather and renowned training staff to keep his consistently injured body healthy and on the field.

The main risk I see in this deal for the Padres, as is the case with all such extensions, is the aforementioned  health of the player.  It’s a risk that is inherent with any player contract player, but even more so with a player who has had  stints on the DL 3 of the past 4 years, including this season with knee surgery that delayed his Padres debut.

If he stays healthy there is not reason to believe he won’t continue to be a 25+ HR threat a year, that will add some much needed RBI production, and consistency to the Padres lineup.

At a minimum it is nice to see that the pending ownership change is not handcuffing the baseball operations department from continuing to make the team better and move forward.  Instead of defensively dismantling a team that is playing better as the season goes on, the message has been sent that the organization is looking to make moves to stabilize and strengthen the team on the field moving forward.

Said Byrnes, “This is not a roster we want to tear down,” which I believe is a good message to put forth to the players in the clubhouse, the fans, other teams, and potential future free agents, that the Padres are trying to move forward from a position of strength that is hopefully gaining momentum.

Congratulations to both Carlos and the Padres on getting this deal done before the trade deadline.  I hope to see his intensity at the plate continue to be a productive force and an anchor for this Padres lineup for the next several years.