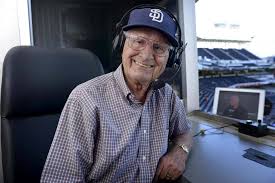 Spring training is not the same without you Jerry!

The Padres officially announced today the 2014 spring broadcast schedule, which features all 29 preseason games being available to fans via radio, audio webcast, or TV.

15 of the preseason games will be broadcast live on the radio on either 1090 AM or ESPN Radio 1700.  There will be 13 Cactus League games broadcasts, and both exhibition games at USD will be aired.

The Padres will make audio webcasts available for any game that is not broadcast on either FOX Sports San Diego or The Mighty 1090/ESPN 1700. The live audio stream will be available free-of-charge exclusively on padres.com, beginning with the annual charity game against the Seattle Mariners this Thursday, February 27 in Peoria. In order to gain access to the free live audio stream, fans will be required to log-in or create a free account on padres.com will be on the radio as well.

FOX Sports San Diego will televise 10 spring games, including eight in Arizona and the two exhibition games against Cleveland at the University of San Diego (March 28, 29).

The complete 2014 spring broadcast schedule is attached and available at www.padres.com. Individual games are subject to change.

Of course we’ve been sadly missing The Colonel Jerry Coleman this spring, but still looking forward to talking ball with you along with Ted Leitner, and Jesse Agler during the radio and internet broadcasts!