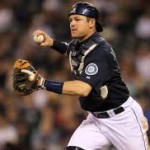 The Padres just released a press announcement that they have traded for catcher Rob Johnson from the Seattle Mariners in exchange for a player to be named or cash considerations.

Johnson, 28, had been designated for assignment by the Mariners last week, to make room on their 40 man roster for Jack Cust.  Seattle had 10 days to trade, release or send Johnosn to AAA – they found a trade partner in the padres.

In previous years Johnson had generally been regarded as a strong defensive catcher (although there were some who would debate that evaluation).  However,  following two hip surgeries, and a wrist surgery following 2009, some evaluators felt those skills wained last year.  The Padres are apparently hoping that an additional year of recovery from those procedures will help Jonson for 2011.

With the addition of Johnson, the Padres now have 38 players on their 40 man roster.

With today’s transaction the Padres currently have 38 players on their 40-man roster.