You are here: Home / Baseball / Padres Strengthen Lineup With Addition Of Quentin 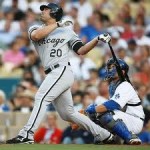 If you are a Padres fan it’s hard not to like this deal.  Why?

Are there risks? Of course.
As I watch Byrnes make his first moves and start to put his fingerprints on the organization, I am struck by two impressions. First, as the Latos deal clearly signaled, he is intent on adding depth to the organization and is not afraid to make bold deals. Second, from this move I see the manifestation of what he told me was one of his greatest lessons learned from his experience as the GM of the Diamondbacks for 4+ seasons – that no matter what your team’s strength is, if you don’t address your weakness it can become overwhelming and take down your whole team.  He addressed the Pads debilitating weakness from last year, by adding what should be some experienced right handed pop to the lineup.
I’m looking forward to the Padres’ next move in this continuing organizational makeover.
Scan
← Pads Add Power Arm In Cashner; Send Rizzo To Cubs Byrnes Makes Bold Move In Moving Latos →