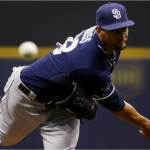 Well, that didn’t go as expected. The Padres knew that they were facing MLB’s hottest team when they entered Miller Park for the three game set, but showing up with the N.L.’s third lowest team ERA themselves, and Cashner, Kennedy, and Ross heading to the hill you figured there would be at least two pitcher’s duels against the N.L.’s second best team ERA. It turned out here was only one…and it featured neither Cashner nor Ross.  Here’s how it all went down:

It was another series that put all the pressure on the Padres pitching staff, who as a whole have responded incredibly well having to perform under the pressure of having to deliver games worth of crucial pitches in close contests almost every single night.  At some point the offense will need to step up and start putting up some runs to take some of the weight off the shoulders of the hurlers before they crack under the nightly intensity of their charge.  As ineffective as the offense has been overall, the Padres are still only 2 game sunder .500, and 3 games behind the N.L. West leading Dodgers.  It’s the toughness that they’v shown, and ability to still somehow scratch a couple of runs to grab some close wins thus far, that leads one to wonder what they’ll be able to accomplish once their offense wakes up and does nothing more than return to it’s historic norms in terms of individual averages, on base percentages, and slugging percentages. Hopefully that happens against the upcoming 4-game set with the tough Nationals.

Here are the pitching match ups.

The Nationals have the third most productive offense in the N.L., but their team ERA is in the middle of the pack, and after a hot start they have lost 7 of their last 12.  On top of that there has been the recent distraction of Bryce Harper being benched for lack of hustle, so the timing may be right for the Pads to rebound and take the middle series of this 11 game road trip.