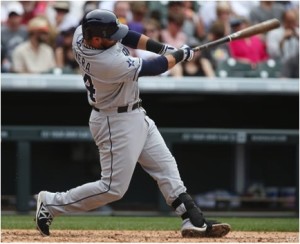 Rivera hit a solo HR today to keep the Padres within 1.

One thing you know for sure when you go to Coors Field is that you are going to have some long, crazy, exciting, and draining games, and this three game set was no exception. Here’s how the Coors Ball went down:

Some tough losses for sure.  Game one giving away the winning runs.  Game 3 working hard to come back, then to drop it on a pitch that was pretty good…but that’s baseball, and that’s especially baseball in Colorado.  So, a .500 road trip.  Most teams can live with that.  The good news is the team is basically playing good baseball, the pitching continues to be solid, and the hitting is starting to show signs of life averaging 4.7 runs over past 10 games.  Time to bring it home for a quick day off to recharge, and then take on the Twins who have won 5 of their past 7, and 9 of 15.  The match ups will be as follows:

Andrew Cashner is expected to have his MRI on the elbow on Monday, and of course we’ll keep you updated if we hear anything. Enjoy the day off!