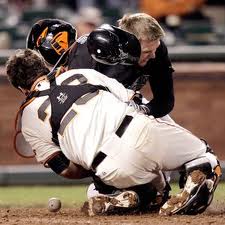 You were asked whether or not you like the new no-collission rule being enforced this year by MLB.  Here was your response:

Personally, when I first heard that this rule was being considered I was quite against it for two reasons:

I’m actually very surprisingly pleased with the rule as it was ultimately designed.  It does not take away the possibility of protecting the plate, only the intent of either the runner or catcher to purposely try to injure the other.  All said and done, as I read the rule it should not affect the intensity or importance of the play at the plate, or even the possibility of contact, only the predetermined intent to injure another player.

Thanks for your votes on this question, and hope you will share your opinion on the new fan poll about which new Padres player will have the greatest impact this year!