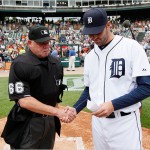 Despicable, embarrassing, awful, disgraceful, are just some of the adjectives I‘ve heard in the past 48 hours describing Jim Joyce’s missed call at first, which cost Detroit Tiger starting pitcher Armando Galarraga a perfect game.  Many have labeled this just another “Black Eye” for baseball, but I see it as one of it’s shining moments.

Do we all feel bad that the call was missed?  Absolutely!  Perfect games are one of baseball’s greatest personal achievements, and no one, especially umpires, wants to see an umpire’s errant judgment call play a part in the outcome of any game.  That being said, the truth of the matter is that missed calls have, always will be, and in my opinion always should be a part America’s greatest sport.

Blasphemous!  Scan must be out of his mind, even more so than normal!  We have the technology; we must do something to correct this systemic evil!  Scan just doesn’t get it!

I may be in the minority.  It may sound like I’m talking crazy, even for my standards.  It may even sound like I’m not for justice.  It may all seem like that, but believe me, I DO get it.

There is a reason that the game of baseball has been able to weave itself into the fabric of American culture, and into the hearts and souls of men and women from every walk of life and social status.  No matter where you go, or with whom you are interacting, a conversation about baseball can be brought up, and usually an opinionated, passionate, and personal exchange will follow.  Why?  Because baseball is the most human, and humanizing of all team sports.

Most everyone has played it at some point in his or her life, and if you’ve played the game even for one inning, or just one at bat, chances are you have experienced the most common result that comes from playing the game – failure.  I don’t mean to sound negative, and the comment isn’t meant to be a downer, but it’s true, baseball is recognized as a sport of failure.

The object of the game is to hit the ball safely so as to score runs and win the game, but the very best at doing this are successful only 30% of the time – 70% of the time the very best in the business fail in their quest.  Everyone who has ever played the game, or been a part of it at any level has been humbled by it, and that is what connects all of us to it.  Yes, as in all walks of life some are more gifted, blessed, hard working, or just plain lucky, and get chance to experience more successes than others.  But even those chosen few, who reach the highest pinnacle of accomplishment at the highest level of MLB, have been humbled at some point by that little white ball.

Players make errors, throw bad pitches, make mistakes on the base paths, and swing and miss at the meatiest of pitches.  Managers construct bad lineups, make poor in game decisions, and seem to constantly miscalculate the next pitching move.  Front office personnel draft the wrong prospect, trade away the next superstar, and sign the aging free agent for too many years.  Umpires miss the bang-bang play at first, don’t catch the balk move, and freeze on calling the third strike that just painted the outside corner at the knees.  That’s baseball!  It’s the failure and frustration that permeates every facet of the game, that makes those moments of victory and success that are achieved so meaningful and fulfilling.

It’s that delicate balance between failure and success, of frustration and celebration, and yes of good fortune and tough luck that makes baseball a true imitator of life.  As in life, baseball demands that you be able to tough out the hard times and bad calls.  Life is sometimes unfair, and so is baseball.  One of the lessons that playing the game teaches us is that sometimes you get the call, sometimes you don’t, but either way you keep playing the game.

Some will argue that the technology exists, so why not use it to make the game better?  I’m all for making the game better, and generally I believe technology is a good thing, but it isn’t the cure all.  I love my MacBook computer that I am typing this article with, but I don’t love that without supervision my kids would sit on it playing mindless video games for hours, or discover something they shouldn’t be seeing at their age.  Bringing in technology can be a good thing but its use needs to be tempered, and very carefully monitored, because the temptation to use it to solve all of baseball’s “problems” will be tremendous.  The fallacy that technology is the cure all for any in game disputes is a dangerous yet enticing siren call that can lead to a collision into the rocks.

The strength, attraction, and most defining character of this great game that has existed for over 160 years is its humanity.  And while some believe that this most recent incident of human error was a tragedy and a black eye for baseball, I think that nothing could be further from the truth.

Why? Because through that incident the world had a chance to see all that is good and genuine about the game, and the people who play, coach, and officiate it.  Every person involved with that unfortunate miscall has handled themselves with dignity, sincerity, understanding, compassion, and class.

Jim Joyce manned up, took responsibility for his mistake, and showed sincere regret and sorrow for the poor call he made.  That took a lot of courage, far more so than we’ve seen out of most of the recent cowards of the game who continue to hide behind their steroid inflated career stats and bank accounts.  If there is any doubt left as to how seriously he, and most of the other umpires in MLB, takes his job and the importance he places in doing his job properly, then take another look at him wiping away the tears during his press conference, and at home plate the next day.

Armando Galarraga could have whined and moaned about the injustice that was served him denying him baseball immortality.  Instead he finished pitching the game, and afterward showed no animosity towards Joyce for the mistake reminding us all that, “nobody’s perfect.”  He then showed a great moment of compassion and public forgiveness by, at the suggestion of his manager Jim Leyland, bringing out the line up card to Joyce at home plate the next day, bringing Joyce again to tears.

Bud Selig, to his credit, followed suit, and declined to reverse the call despite intense public, and media outcry and pressure to do so.  He vowed to review the process, which may ultimately dangerously open the door to increased use of instant replay, but he did not cave in to the pressure to artificially consummate a personal achievement, that could have had rippling consequences for the life of the sport.

All of the characters in this drama, played out on baseball’s stage, could have created a tragedy through their actions.  Instead they performed for all of us an epic tale of accountability, and forgiveness that leads to redemption.  This is a true celebration of humanity that demonstrates how to handle situations as a man, and how to handle situations as a member of the community/family of major league baseball.

The way this potentially explosive situation was handled by all involved has made me as proud as I’ve possibly ever been to be associated with baseball, and everything good it represents, including its humanity both in its faults, and as exemplified by this event, its strengths.

Tags: galarragajoyceumpire
← CY Fighting To Get Back In Time HeyScan email responses for 5-31-10 PART 2 (of 2) →