You were asked does MLB need to change the rules, and allow pitchers to legally use pine tar on the ball? 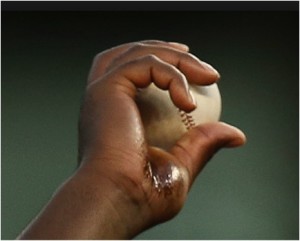 Miguel Pineda’s hand prior to his suspension for later having it “hidden” on his neck.

I agree with most of you that there is no need to make any changes to the rules about doctoring the ball. Despite what many pitchers claim, it can and often is used for the sole purpose of increasing the grip on the ball to increase the spin rate on breaking pitches to create more action.  The batter’s safety is not at the forefront of the pitchers’ minds, rather their demise on on a razor blade slider, or off the table curve ball for strike three is the hoped for effect.

Looking forward to seeing your vote on the new fan poll question asking which current Padres uniform you like the best.