You are here: Home / Baseball / Response to Facebook postings about giving credit where it has been earned.

Response to Facebook postings about giving credit where it has been earned. 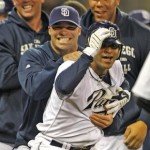 Thanks for all the positive input (see Facebook postings by clicking on icon above). Glad to hear there are some Pads fans who are enjoying and appreciating what this team is doing. Giving credit where it is due, to a team that is busting their tails everyday and flat out winning games is not a cop out.

The goal IS and HAS TO BE wining a CHAMPIONSHIP…period! I agree that anything less thanthat goal as an organization IS unacceptable, and San Diego fans DO deserve the Gold Ring after years of unwavering support.

If a certain portion of fans feel a need to take out their frustrations for the failings, and disingenuous intentions of past regimes then so be it. I’m for moving forward, giving the new leadership a chance to prove it’s intentions, and supporting a group of players that have shown me for 5 months now that they actually give a damn about playing the game hard every night, with some guts, and determination to play the game right for themselves, their teammates, and the fans. Being willing to show up for a celebration party at the end of a hard season’s work, without being willing to show some support and respect for the effort being put forth during the grind is in my opinion the real cop-out.

Integrity works both ways. When something is bad, then have the courage to say so, and try to to make it better. If something is good, especially if it occurs counter to your expectations, have the decency and honesty to acknowledge and support another’s hard earned success.

No one is handing out Kool-aid here, just giving credit for what has been the most successful and by far the most entertaining baseball I’ve seen a Padre team play in recent memory. There are no promises in this sport, and never any guarantees, but regardless of what happens from now until September this team so far has been exciting and inspiring to watch. Keep it going boys!