You are here: Home / Baseball / Pads Take Opener – Show Off Some Of New Winning Formula

Pads Take Opener – Show Off Some Of New Winning Formula 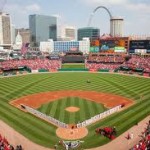 “Cant win ’em all if you don’t win the first one!”  That’s what we used to say as players when ever we were the victors in the season opener.  The Padres clubhouse was no doubt yelling that refrain after yesterday’s hard fought, extra inning, 5-3 win over the Cardinals at New Busch Stadium.  It was a game that featured 3 Friar comebacks, hopefully making it a harbinger of another season of exciting, tough, never say die Padres baseball like we watched all last year.

In many ways, in my opinion, it exemplified how this 2011 Padres 25 will have to play in order to keep pace with what should be a stronger overall N.L. West division.  Tim Stauffer did a nice job in his first opening day assignment, allowing only 2 runs to cross over 6 innings of work.  He allowed 9 hits, and had base runners on in every frame, but was able to make the big pitch when he needed it to work out of jams, or keep the damage to a minimum.  What went on around him though featured some of the key ingredients to a winning Padres season (click here to see season preview article).

The bullpen was solid, despite a home run allowed by Mike Adams on a pitch that I’m still not sure how Holiday hit out with one hand, with Bell slamming the door shut as usual.  Game over – Padres notching their first W, showing off some strengths that they will need to rely upon throughout the season.

Padres In The Midst of A Perilous Plunge Time for Padres’ team nicknames to grow up. Pads have several needs at trade deadline, but what pieces will they add?