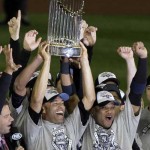 Congratulations to the New York Yankees for winning their 27th World Series Championship in the franchise’s storied 107 year history! Of course, with a payroll of over $208 million (over $50M more than the next highest team salary in MLB) they should have won…right?

Probably more than any of their 26 other championships, this Yankees’ victory has been like a burning match thrown into the “Salary Cap” powder keg, igniting an explosive outcry from fans who feel the balance of power and opportunity for all teams in MLB to compete has been destroyed. More than ever, fans of teams like the Pirates, Royals, Marlins and Padres yearn for a system like those that exist in the NFL and NBA where team payrolls are artificially capped to force equality in resources, and theoretically competitive balance amongst all the teams.

Unfortunately, for these self proclaimed underprivileged and forsaken fans of the baseball world, the truth of the matter is that there is no concrete evidence that salary caps significantly increase the chances for all teams to win championships. Looking at the other major professional sports leagues that have incorporated salary caps, purportedly to improve the league’s competitive balance, there appears to be only one true function that the salary caps in place have served – to provide controllable and predictable costs for team owners. Let’s take a look at some of the evidence that debunks the competitive balance myth.

Let me preface the assertions that follow by saying that I do believe teams with significantly more financial resources should have a better chance of success on the field if their management can effectively identify, develop, and direct talent. However, if it was true that the Yankees “bought” themselves a championship this season, and that money is the deciding factor in bringing pride and top bragging rights to your city and fans, then why haven’t the highest spending teams won it all every year? Why is this the first time in 9 years that the Bronx Bombers have gone the distance, despite boasting the highest payroll each of the past 9 seasons?

For that matter how come the Yankees haven’t taken home the trophy even half of the time? Heck, how come in just just looking over the past 22 years, most of the time the highest paying teams have not even made it to the World series, let alone win it? Since 1988 the teams with the highest team payroll have made it to the World Series 7 times, and won it only 5 times – that’s a less than 25% chance of winning it all while spending it all over the past 22 seasons. The fact is, 8 different organizations have won the World Series over the past 9 seasons, and there have been 19 different organizations win it all over the past 27 years. By comparison the NFL, supposedly more competitively balanced by their salary cap structure, had only 6 different winners during the past 9 seasons, and 14 over the past 27.

As for the reportedly more balanced NBA (which was heralded as the example of healthy competitive balance created through their salary cap system by baseball ownership representatives during the labor negotiations in 1994), they’ve had only 5 different teams win it all over the past 9 seasons, and only 8 different cities have celebrated in the streets since instituting their equalizing salary cap in 1984! Hmmmm…do you think the Detroit Lions or L.A. Clipper fans are feeling the parity right now in their salary capped leagues? Does the fact that last year 6 NBA teams lost over 70% of their games, or that Vegas odds makers only give 5 teams in their entire league a better than 10% chance of winning the title scream out competitive balance, parity, and more enjoyment for their fans?

Looking at it from a slightly different angle, there was a report done in 2002 calculating the disparity in salaries between MLB teams, and the corresponding disparity in wins between the teams using data spanning from 1929 – 2002. Probably to no one’s surprise the disparity in payroll between teams almost doubled during that 74 year span. However, what may be eye opening is the fact that during that period while payroll disparities were increasing, the disparity of victories between teams throughout MLB had stayed the same in the A.L. and actually decreased by 20% in the N.L.! In other words, despite the difference in salaries between the “Haves” and “Have Nots” almost doubling since 1929, the competitve balance remained the same in the A.L. and it actually improved in the N.L. Part of this phenomenon may be explained by the addition of more talent to the overall pool of players with the addition of African-American athletes in 1945, and later with the influx of foreign players from South America, Asia, Australia, Canada, etc. over the past 30 years. The point is, more than ever it is getting harder to significantly improve your chances of winning a championship simply by spending more money.

There are countless other examples, statistics, and breakdowns of how MLB has had a greater diversity of winners and losers at every end of the financial spectrum than either of the other two major sports leagues which do have salary caps in place. But the bottom line is this – it’s not how much you spend, it’s how you spend it. It’s not the players fault if certain MLB owners have been unable to produce competitive teams or reportedly make a profit during the industry’s “Golden Age”. An industry that is the only legal monopoly in the United States, which reportedly generated over $6.6 Billion in revenue just last year, and gives tens of millions of dollars through revenue sharing to it’s supposedly financially neediest clubs. Fans have a right to be mad if their team is a perennial loser because in most cases, and now more than ever, it has less to do with payroll, and a lot more to do with inept front office management, or a continued commitment to mediocrity by their team’s ownership.

Go ahead, Pirate fans, and get mad that the Yankees won, but try not to automatically take the easy route and blame it all on the Players Union for refusing to accept a hard salary cap. Poor management, misguided player evaluation, player underperformance, irresponsible use of funds, and ownership apathy are prevalent in every sports league, salary cap or not.

A tip of the cap to the Yankees players, coaches, management, and ownership who earned a championship this season, in what many still consider to be the most competitive league in all of sports.

My A.L. preseason picks…what are yours?