You are here: Home / Baseball / Adrian..should he stay, or should he go now?

Adrian..should he stay, or should he go now? 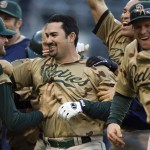 Padre fans have a lot of questions as their team gets ready for the 2010 season.  But by far the question asked the most…”Are the Padres really going to trade Adrian Gonzalez?”

I doubt if anyone knows for sure, not even the Padres,  whether he will be wearing a Padres uniform on opening day, let alone at the end of the 2011 season when his current contract ends, but there are certainly compelling reasons why he could remain a Padre his entire career, or be shipped off for prospects before the end of his contract.

Let’s take a look at the factors that could sway the decision in this escalating tug of war.

First, some reasons why Adrian should, or could stay a Padre.

Now, the reasons Adrian should, or could be traded:

The bottom line of the debate, for me, is this – if the goal of this organization is to eventually build up its payroll to top out at $70M-$80M, then they are probably better off moving him sooner rather than later. It would be hard to believe that he would have any greater value than between now and the July trade deadline. Move him while he has maximum value, and the Padres still have some perceived bargaining power of not having to move him. Each month that goes by potentially weakens both points of leverage. Unless Adrian is willing to take significant discount to play in San Diego, he already knows that his time here is ticking down, which makes it even more difficult to stay focused and produce at his maximum potential. It appears to me that moving him sometime between now and the trade deadline, when a significant upside return package is presented, will be the best thing for the growth of the organization, and Adrian.

In the meantime, let’s enjoy every Gonzo at bat, every exciting aggressive defensive play at first base, and each public appearance or fund raiser that helps the community, for he is a rising superstar in our midst, and a vital key to the Padres future whether he stays or goes.

Tags: Gonzalez, AdrianPadrestrade
← It's Time For Hall OF Fame To Welcome The Hawk! Yankees Championship! Poor argument for salary caps. →