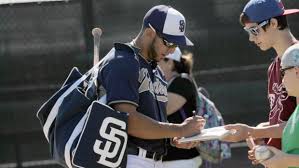 Alex Castellanos signing for fans before hitting an HR against Dodgers in the game today.

I love a good comeback, and I almost got to see the Padres pull one off today…but they fell a run short to the Dodgers today 5-4.  Interestingly enough, much of the most pertinent news of the day actually happened on minor league fields of the Peoria Sports Complex, not the main stage at Camel Back Ranch. Let’s review the game quickly then get to the meaty stuff.

Joe Wieland started the game instead of regularly scheduled Andrew Cashner (we’ll get to that in a minute), and was responsible for allowing all 5 of the Dodger runs to score.  In the first inning it was because of mistakes in the zone that lead to a lead of 3B, base hit, base hit, and voila 2-runs were across. Then in the third inning it wasn’t his command that left, but his control.  Three walks issued, including the last one with bases load to plate the second run of the inning, was his undoing.  Jesse Hahn came in to get the final two outs of the inning, and by then the Pads trailed 5-0.

Keep an eye on Hahn, by the way folks.  You’ve seen me singing his praises in these reports more than once.   His stuff is really good, and his composure on the mound is as well.  He’s yet to allow a run in his 4 games of work, spanning 6 2/3 innings. Small sample size, I know, but I liked his stuff in the pre-seson bullpens and batting practice see ions, and it’s carried into the games.  He’ll probably start the season at AA,  and it would not surprise me at all if we don’t start hearing his name mentioned in the batch of your prospect arms that are expected to be making their marks in the big leagues in the next couple of years.  Not likely a top of the rotation guy, but certainly middle of the starting ro.  Nice pick up along with Alex Torres from TBR.

The Pads did make a comeback that I mentioned.  After being shut down by a parade of LAD pitchers, including a 17 year old left handed phenom named Julio Urias, Alex Castellanos broke the spell with a lead off HR in the 8th.  The Pads followed with 4 more hits and a walk to get within 1, but it wasn’t meant to be as the Friars went down in order in the 9th.

So what was so interesting going on away from the big stage?  Plenty.  In order of occurrence.

Maybe more exciting that any of that, was seeing padres VP Wayne Partello playing with the team’s new heli-cam contraption! Cool little toy than can hover multiple stories above the ground, and cruise around anywhere. Have to give Wayne credit for both building the thing, and piloting it this morning…neither of which made me feel overly safe as I stood precariously near by the bladed levitation devise. It is expected that the drone will be used in pregame shoots.

We’ll be broadcasting the game on the Mighty 1090 tomorrow, so hope you’ll join  Ted “Uncle Teddy”Leitner and myself for the call tomorrow starting at 1:00 PST.

By the way, if there are more typos tonight that normal, please forgive me.  Just came from the Bar Mitzvah celebration of the son of my friend who’ve I’ve known the longest in my life.  Pretty cool that I was able to go to his celebration of crossing into manhood 34 years ago, and now I got to see his son take that same step. Life is good…and so was the party!