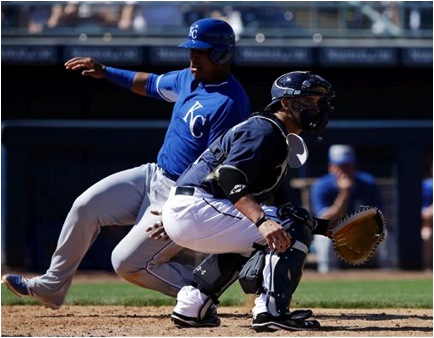 Grandal awaits a perfect throw from Xavier Nady to gun down Omar Infante to end the first inning. Perfect execution of new MLB plate-collison rules by both players.

Soooo close to locking up a nice come from behind victory today over the Royals.  One pitch away, as a matter of fact.  But that is one of the beautiful things about the game, and at times the most agonizing, that you do need to record the final out.  There is no clock to save you.  No penalty flags to negate a big play. No way to take the air out of the ball, or ice the puck, or take a knee.  You have to make that final pitch.  The Pads were down to needing the final pitch with 2 outs, no one one, and a 2-run lead…but it slipped away. Double, home run and just like that the lead was gone, and an inning later the victory went to the other team.  That’s baseball….and you have to appreciate it even when it doesn’t go your way.

The Pads found themselves in a comeback situation in the 5th after starter Ian Kennedy allowed single runs to score in the 1st, 3rd, 4th, and 5th innings.  Honestly, though, I thought Ian threw better that the box score suggests. Yes he made a couple of mistakes in the first, but after that settled down, and made a lot of good pitches.  Unfortunately there are days when your good pitches don’t turn into outs like you’d like them to.  The sinker at the knees is hit on the ground but finds a hole. The slider away is fouled off instead of rolled over to the third baseman. The 2-2 FB in hits your catcher’s mitt, and he frames it perfectly and the umpire vapor locks and doesn’t ring him up.  Then the follow up 3-2 pitch gets flared opposite field.  I’m not making excuses for him, and you know that when a guy is not pitching well I’ll say so, but I thought Ian did a lot more good things today than bad.

The first part of the Pads come from behind rally came in the third with the long ball.  First Yonder Alonso went deep, crushing the ball over the fence in CF just to the right of the batter’s eye.  Yasmani Grandal then singled to set the table for the 88 Train, big Kyle Blanks, who hit the first pitch he saw about as hard as you can hit a ball sending it sailing over the left field fence.  In fact, the Royals left fielder never budged to even pretend to be able to catch it, and KC’s pitcher, Jason Vargas, who threw it stood there and watched it, seemingly admiring the display of strength as well, even though it was at his expense.

Part two of the rally came in the 7th when again the Friars posted  a 3 spot, this time going small with 2 singles, 2 BB’s, and a fielder’s choice ground out with a throwing error.  Not sexy but it did work and the Pads were up 6-4 heading into the 9th.  All looked good as the first two batters of what was hoped to be the final frame made outs, against the  closer du jour Don Roach.  But the next batter doubled on a 3-2 pitch out over, and the next batter hit an opposite field HR barely over the right field fence the score the tying runs.  The following inning the Royals scored 3 to take back the lead they healed through the first 6, and locked it down for the W in 10.

So what positives can we glean from today?

Before the workouts this morning the Pads made 3 more cuts which you can get all the details for by clicking here.

Buddy said he expects Chase Headley to be in games in the next few days.  Alex Dickerson, who sprained his left ankle yesterday is not day-to-day.   Apparently he sprained it pretty good, and is out indefinitely right now.  Casey Kelly came out of his live BP just fine yesterday, and will do that a few more times before pitching a simulated game, which would then lead to competing in actual games.  I think that’s all the camp scuttlebutt for now.

Tomorrow’s contest will be at Peoria again, this time against the Rockies.  Tyson Ross will pitch that game against the division rivals. Uncle Teddy and I will bring the call on the Padres.com webcast. Hope you’ll join us!

← HeyScan Fan Poll Results - Who will get the most wins in '14... Padres Send 3 More down To Minor League Camp →